PATERSON – For the first time since 1996, the Kennedy Boys Soccer Team has won the Passaic County Championship. Senior Luis Portillo scored a goal in sudden-death overtime to defeat the #1 ranked Clifton Mustangs, 1-0.

Superintendent of Schools Eileen Shafer was among the many Knights supporters at the game, dressed in her authentic Knights hoodie.

“This is truly a historic achievement that has brought so much pride to Paterson Public Schools and the great City of Paterson,” said Shafer. “It was a tough game, but everyone on the team had heart – that internal drive that helps you achieve heights you may have thought weren’t possible. Congratulations to Head Coach Richard Solis, Assistant Coach Alfredo Serrano, Athletic Supervisor Scott Durham, and every one of the Kennedy Boys Soccer Knights!”

“It took us four years to get to this level,” said Head Coach Richard Solis after the game. “Last year, I remember we were almost there. Experience, that’s what we needed. Today, we showed it and we delivered.”

“It’s something that we dreamed about,” said Senior Luis Portillo while the celebration continued on the pitch.

“We’re humble and we’re hungry,” said Portillo, when he was asked what was special about this year’s team. “Every single one of us, we’re hungry and we wanted it, and we brought it home to Paterson.”

It had been an intense game with Clifton, marked by many fast breakaways down the sidelines, scrums in front of the goals, penalty kicks, and the occasional long shot on goal that threatened to give the advantage to the Mustangs.

But in the end, it was Portillo who was at the right place at the right time – the left post of the Clifton goal – to head the ball into the bottom right corner and end the game with about four minutes left in the overtime period.

Goalie Javier Sanchez proved to be an impenetrable defense again for the Knights, earning him another celebration of being tossed in the air by his teammates after the game – this time, while they chanted, “MVP! MVP!”

Emotions ran high as many of the Knights were overcome with emotion at the reality of their achievement. Some were held by their coaches and teammates as they felt the relief of having the county championship in hand.

After the team and their supporters posed for photos, Assistant Coach Alfredo Serrano stood up and said, “First, we have to thank Him” with his finger pointed skyward. Then Serrano dedicated the Passaic County Championship plaque to Kennedy High School Athletic Supervisor Scott Durham in gratitude for his support.

Among the other district officials at the game were Assistant Superintendent David Cozart, Kennedy Principal of Operations Michael Hill, and Board of Education Commissioners Vincent Arrington and Emanual Capers. 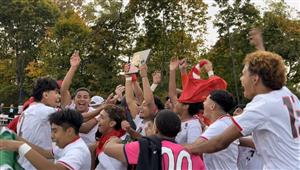 Photo 02: The team and their fans gather for a photo. 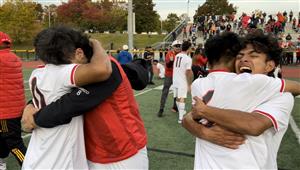